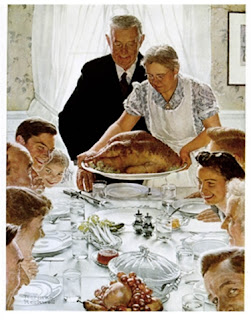 In South Africa we don't have Thanksgiving. I grew up never knowing the delicious combination of stuffing, cranberry sauce, turkey and gravy. I had heard about it, of course, and loved the idea that Americans, those mysterious, magical people that lived across the Atlantic, gave an entire day over to giving thanks. I had watched movie and TV versions of Thanksgiving. Although I had never seen the Norman Rockwell painting of Thanksgiving, that's exactly what I thought it was: an idealized, beatific day of love, thanksgiving and warm family moments.

My first Thanksgiving in the States didn't go quite according to this imaginary version. Here's what I learned:

1. Life happens EVERY day of the year. For some reason I have this notion in my head, always have, that certain days of the year are too special for anything catastrophic to happen. Maybe because I was raised a Christian and the God I believe in would never spoil a special day? I don't know but the fact remains that I am always completely shocked when a crisis happens on a holiday. Imagine my surprise when my host has a heart attack while carving the turkey and making gravy.

2. Denial of a problem can be very dangerous. The bizarre part of this, my first Thanksgiving story, is that apparently my host was in agreement with me about this idea of "bad things can't happen on good days" and refused to acknowledge his heart attack despite turning grey, sweating profusely and having sharp chest pains. Two days later his wife found him, unconscious, on the living room floor. Fortunately he survived both heart attacks and was immediately scheduled for bypass surgery.

3. Living unconsciously will hurt you. You can't live a stressful life, drink too much, smoke and eat junk and expect that you'll still be okay. It's the same with your psychology.

4. There's a compound effect. My host didn't have his heart attack on that day because of his choices that day, that week or even that year. It was the result of years of choices and at the time, each little one didn't seem all that harmful. He could light up a cigarette, smoke it and not die. And for years he had been lighting up cigarettes, smoking them and seeing no ill effect but with smoking as with many ill advised activities, the effect is only seen over time. The same is true of life affirming choices. They too have a compound effect.

5. There is great power in thanks giving and appreciation. There were many things about my first Thanksgiving that didn't fit what I had imagined Thanksgiving would be like. My host having a heart attack not the least of them! But my overwhelming sentiment about the day is one of appreciation. When I think back I remember how thankful I was to be with good friends. How intrigued I was that a holiday food could come straight out from a can. How similar this holiday was to the ones we celebrated in South Africa with it's combination of traditions drawn from history, sports, food and yes, even bickering. My feelings of thankfulness far surpass any memories I have of things that went wrong and although we didn't fit the Norman Rockwell painting version of Thanksgiving, we had a day that I will always remember as a day of being welcomed, and loved and for that I am most thankful.

It is my hope and wish that you have a wonderful Thanksgiving. If you need help getting your life turned around and you've realized that denial is not a good solution for you either call or email me and If I can't help you I'll put you in touch with someone who can.

There is great love and appreciation for you.

Happy Thanksgiving!
Posted by Unknown at 9:30 AM